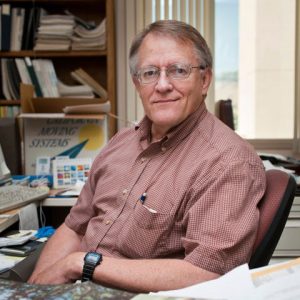 Kelly Redmond, along with Dan Cayan, was one of the original CNAP PIs. He embodied much of what CNAP strives to do, continue to advance climate research all the while communicating and working with individuals to integrate the knowledge for a more resilient future. He was a champion of climate observations, a mentor to many, and a master communicator. CNAP was very fortunate to have Kelly as a leader for so many years. Kelly’s memory carries on in CNAP as our team incorporates his sage advice and his love of climate science into our work.

An email written by Kelly in September 2001 for the Drought Monitor:

Our ticker for the Water Year is still 2.04 inches, and not counting. Sure is dry. Can’t even keep up with Death Valley, which in the same time had 2.46 inches, and now has parrots and orchids and coconuts and cantaloupes, draped in a smothering blanket of kudzu. We had 0.00001 inches (e.g., a trace) in August. The drop that fell, August 8th, was reportedly about 0.6 mm in diameter, striking the gage with a resounding “plink” at about 3 degrees from vertical. Like comets, all our drops are named after their discoverer, so this one was known as Raindrop Dapm. Athletic and educated, but sensitive and shy, it was described as “a bit of a loner,” grew up in a good neighborhood but kicked out by its parents when it couldn’t carry its own weight. When the medics arrived, the badly injured droplet was undergoing dehydration and heat stroke; despite mouth to mouth resuscitation, all hope soon evaporated. The drop was survived by no ancestors or descendants. Cremation occurred at death, and its molecules scattered to the four winds. One was seen near Kentucky just the other day.