The summer of 2017 sported two extreme heat waves that broke all time records throughout the region. These two main heat waves of summer 2017 had very different flavors and spatial expressions. We briefly discuss them in the context of climate evolution and compare them to the great heat wave of late July 2006 . The weather data and available time are not yet adequate to rigorously analyze these heat waves relative to climatology or the background climate of summer 2017. Even less data are available to analyze their impacts. We nevertheless attempt to provide a preliminary assessment. 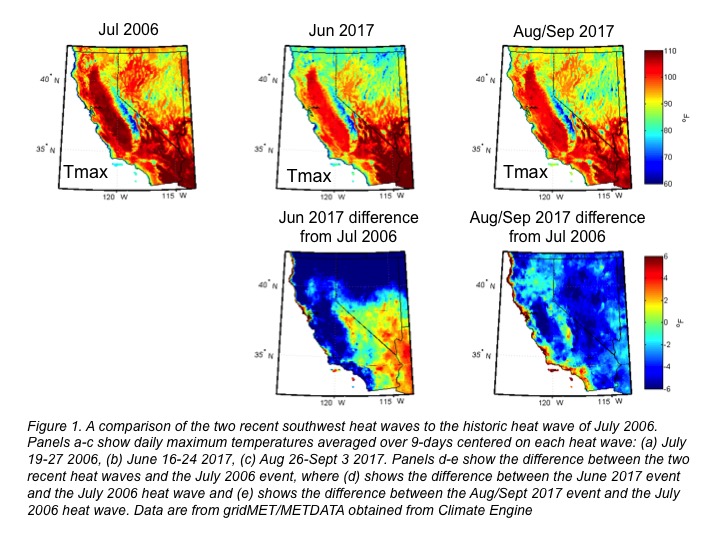 Figure 1 presents maximum temperature (Tmax) averaged over a generic 9-day duration of these three events and the differences of the most recent events with the 2006 heat wave. The figure shows the first heat wave of summer 2017 (June event) was expressed most strongly over the southwestern deserts (including the southern part of the elevated Great Basin) where many all-time temperature records were broken. Las Vegas tied its all-time temperature record of 117˚F, San Diego County saw a record tie for highest temperature of 124˚F in Ocotillo Wells, and flights in Nevada and Arizona were cancelled due to the heat. This remarkable June heat wave appears to have been a dry (Type 1) event that was characterized by strong nighttime cooling (Figure 1) at least relative to the very humid (Type 2) 2006 event. Temperatures along the coast, particularly the coast of Southern California, were notably cool, as were the coastal waters, and coastal low clouds were particularly thick and persistent protecting the coast from the heat that was ravaging the southern deserts. The coastal-inland temperature gradient may have been unprecedented (TBD) at 59˚F as at the peak of the event on June 20, Ocotillo Wells broke the all-time record of 124˚F while Del Mar was at 65˚F. This pattern and the spatial evolution of this event were consistent with the early-season heat waves described by Clemesha et al. (2017) . In terms of health, while the full impact is not yet known, there were reported health effects in San Diego County including medical evacuations of hikers from Cleveland National Forest.

This summer’s second and most recent heat wave that occurred at the end of August through early September, was not as hot as the 2006 event over the Central Valley and the interior deserts, but it was decidedly hotter at the coastal zone where coastal low clouds appear to have been mostly absent. 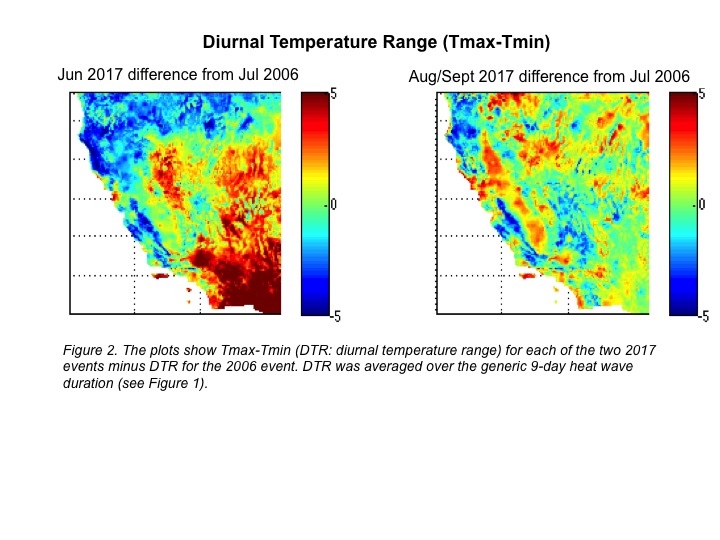 This was particularly true of the Northern California coast where many all-time temperature records were broken including San Francisco, which reached 106˚F on September 1. Moreover, this heat wave appears to have been quite humid (Type 2) as attested by DTR generally on par with that of the very humid 2006 event (Figure 2, right panel). Although hospitalizations records are not yet available, we expect to see a very strong impact of this heat wave on human health given the humidity and heat, particularly at the densely populated and un-acclimated coastal zone. This is in line with observed trends and future projections of disproportionate increases in heat wave expressions at the coast.

We would like to acknowledge partners Alex Tardy and Miguel Miller of the National Weather SErvice at the San Diego Weather Forecast Office for their contributions to the post.